Cadets at all levels of the Air Training Corps have the opportunity to participate in the sport of rifle target shooting, this activity will be undertaken on the below 3 types of rifles.

A “range” is a location designed so that people can take part in shooting under controlled conditions and ranges come in many shapes and sizes. Initially, shooting takes place with the target 25m from the firer, either on a 25m indoor range or a 25m barrack (outdoor) range. Cadets can aim to achieve various marksmanship qualification badges to wear on their uniform. Cadets whom prove to be excellent marksmen, can go on to the Inter-Service Cadet Small Bore Competition at Bisley, against Sea and Army Cadets. The top 100 marksmen of this tri-service competition gain a Cadet Hundred badge.

Safety is paramount with all ATC activities and shooting is certainly no exception. Training is an integral part of the system and each cadet is fully trained in whichever rifle they will be using before they shoot. Each cadet also has an annual weapons handling test to prove that they can safely handle the weapon. Should they fail this test, they are given refresher training before they are allowed to shoot on a range.

At 2F Watford Squadron we have a fully operational indoor 5 metre range where cadets can train to operate and fire the Air Rifle .177

There are a variety of different Air Rifles used throughout the Air Training Corps and will normally be of .177in (45mm) calibre. Air Rifles will often be the first stepping stone a cadet has into target shooting.

For the majority of the cadets in RAFAC this will be the first rifle that they will learn to fire. It is a .22 inch calibre, single shot bolt action rifle. When target shooting this rifle will normally be used on ranges up to 25 metres.

Cadets will learn to fire the L98-A2 rifle when they have reached First Class shot on the No.8 Rifle, and have obtained leading classification. The L98-A2 is of 5.56mm calibre and is a variation of the SA80 used by HM Armed Forces.

The main differences between this and the L85-A2 is that there is no change lever on the L98-A2 preventing cadets from switching to automatic fire. 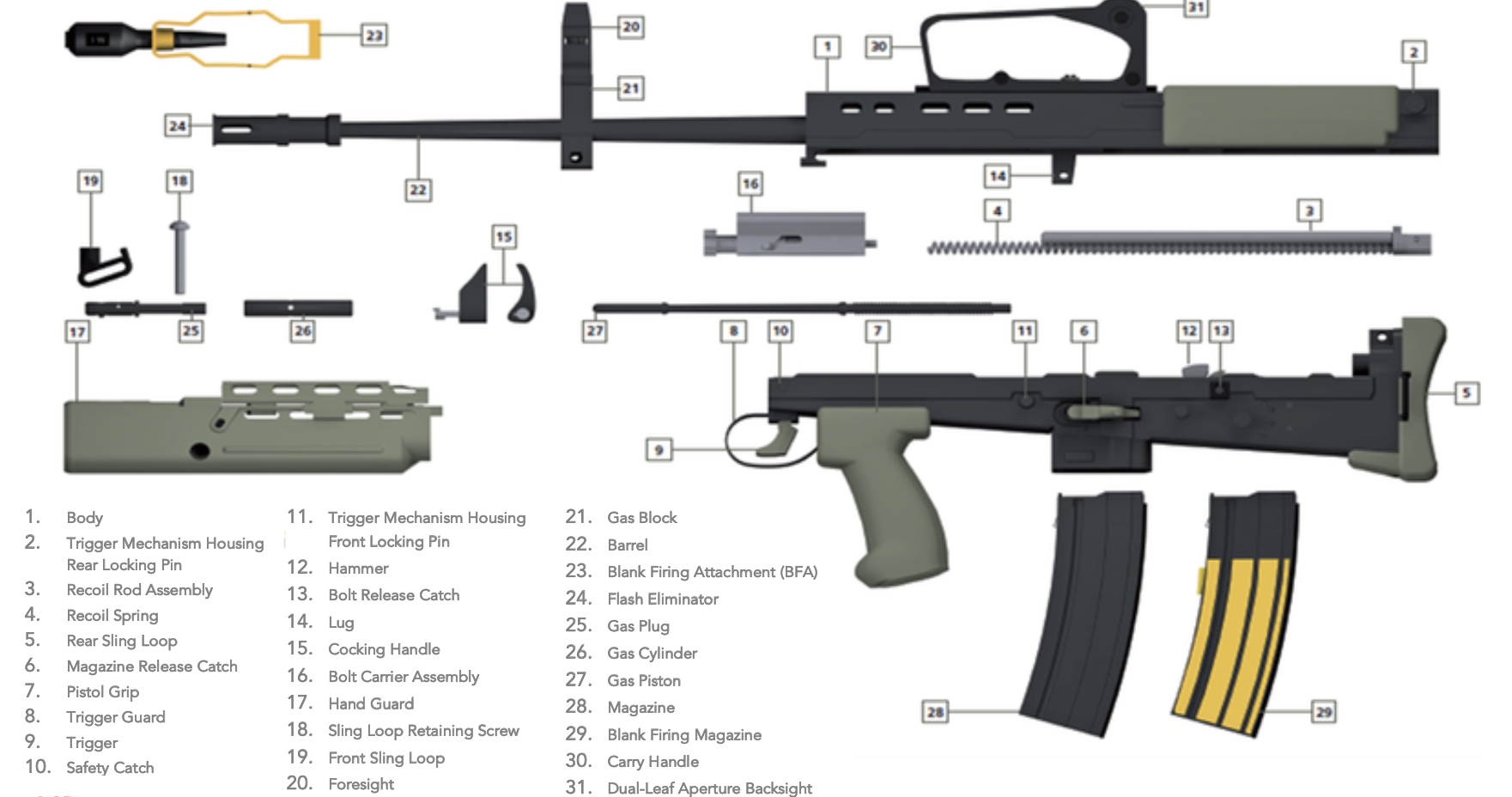 Cadets will learn to fire this rifle after reaching Wing marksman standard on The No. 8 rifle. It is a single-shot rifle and fires the standard 7.62mm round. Generally cadets will fire on ranges of up to 300m due to the rifles high level of accuracy. The L81-A2 Cadet Target Rifle is similar to the No.8 rifle in operation, but scaled up with higher calibre ammunition and greater accuracy.

Cadets have the opportunity to put their shooting ability and training to the test in order to achieve marksmanship badges and certificates. There are a total of four levels that can be achieved, these are listed below alongside the badges which represents each competitive stage, starting with Trained Shot progressing to Competition Marksman for each rifle. 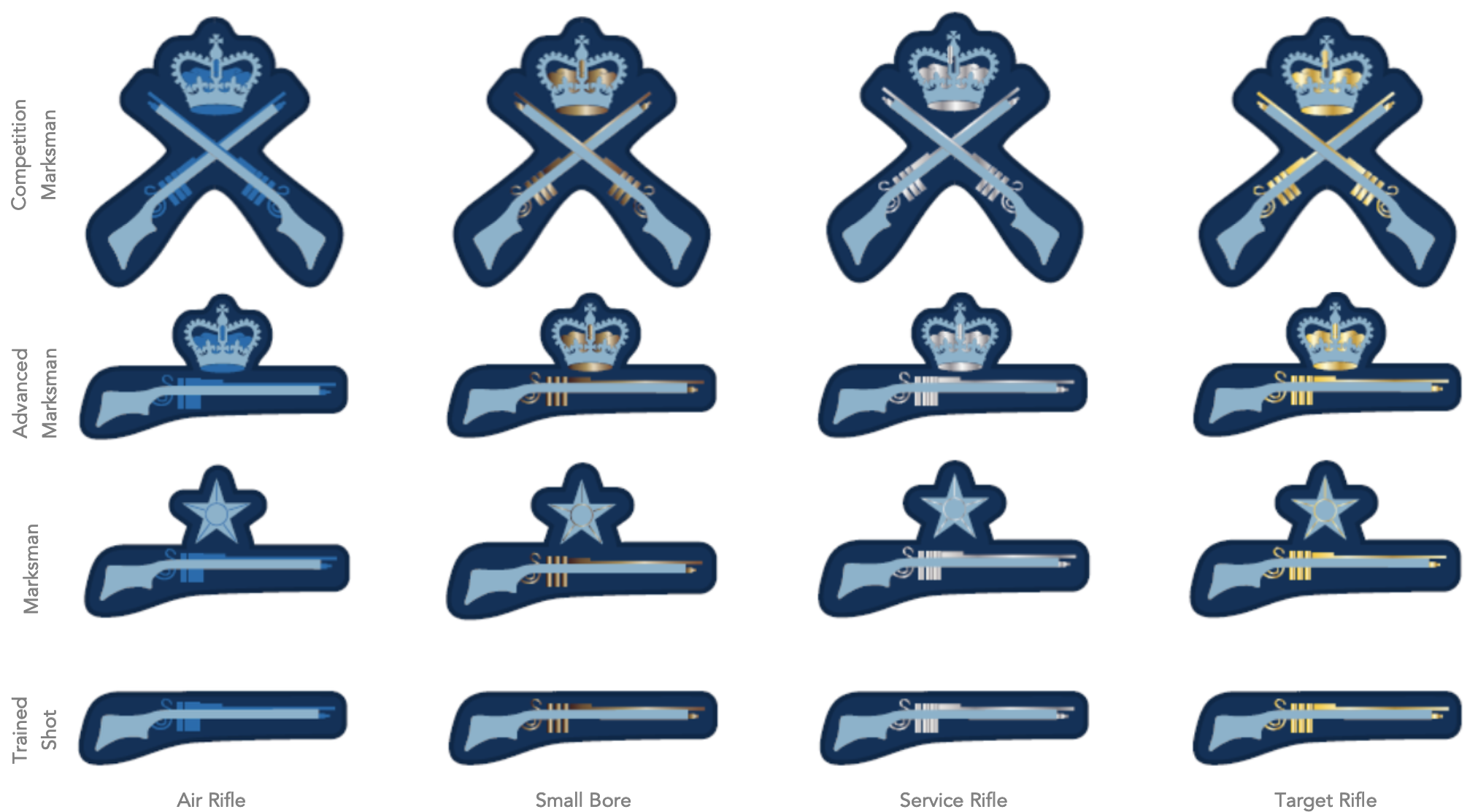 The disciplines are as follows:

Each marksmanship test increases in difficulty and gives the cadets a progressive training programme to work their way up to the highest level of shooting. Exceptional cadets may be selected to take part in inter-squadron shooting competitions and even competing at a national level.

Cadets who practice more will become more competent at achieving a consistent accurate shot. This comes down to self discipline and mastering the four Principles of Marksmanship:

Finally, for the ‘Cadet 100 Award’ a cadet must attend the annual service, which also includes Amy & Sea Cadets, this is a shooting competition at Bisley and must achieve a score to place them within the top 100 scoring cadets. The badge awarded for this is shown below and is worn alongside the cadet’s Marksman standard. 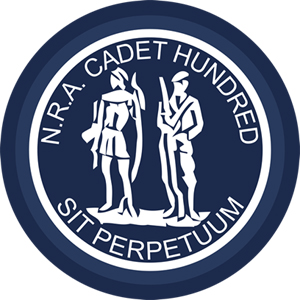