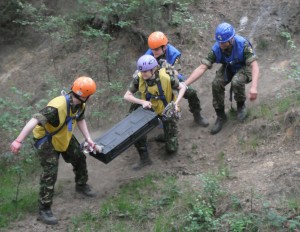 The challenge of teamwork and leadership is the ultimate test for a cadet and could be the greatest achievement of your time with us.
If you aspire to be the best, we’ll help you achieve it.

Squadron based command task activities allow cadets to develop their leadership and delegation skills in various scenarios. This could be anything from manoeuvring a team around obstacles or moving items from one place to another. As you become more experienced as a cadet you’ll take on extra responsibilities and have further opportunities to develop your self-confidence and leadership skills. Formal leadership training is provided at the following three levels – they’ll test your mettle but this is where you can really get noticed!

By showing leadership skills, excellent uniform standards and a willingness to develop others you could soon be on your way to becoming a Cadet Non-Commissioned Officer (NCO).

The first promotion you receive will be to the rank of Corporal (Cpl). As a Cpl you will be expected to take a squad of cadets for drill and be responsible for them. As a Corporal you will be given training so you can communicate effectively, manage groups of cadets and lead effectively.

At the rank of Cadet Sergeant (Sgt) you will be known as a Senior Non-Commissioned Officer (SNCO). As a Sgt you will be

expected to be more involved in the training of other cadets, from the management of a flight of cadets to developing the Corporal’s below you.

Then next rank on the promotion ladder is that of Cadet Flight Sergeant (FS). At this level you will most likely be 17 years old and heavily involved in the management of the cadets and NCO’s below you. As a SNCO you will be expected to plan events on Squadron.

To be promoted to the rank of Cadet Warrant Officer (CWO) you must be aged 18+. Cadets over the age of 18 are known as Staff

Cadets and considered probationary adult staff. As a CWO you are able to stay a cadet until your 20th birthday, at which point you may decide to join the Squadron staff.

There are three sets of Cadet Leadership Courses, which are aimed at 16 and 17 year olds. Each course lasts a week and ends with the award of the Cadet Leadership Badge if completed. The Army Cadet Force (ACF) runs three courses over the Easter period at Nesscliff in Shropshire and three courses in July at Frimley Park in Surrey. Sea Cadets also take part along with Army Cadets, so be ready for some serious competition! The Combined Cadet Force (CCF) runs an Air Cadet Leadership Course at RAF Cranwell each July which is open to air cadets from both the CCF and the ATC.

Not for the faint-hearted, the Junior Leaders Course is physically demanding and requires real commitment and determination. The course, which runs from September to Easter, involves nine weekend training camps and an assessment week. A big step up from the Cadet Leadership Courses, the Junior Leaders Course is aimed at older cadets – you must be 17 or older in the year you begin the course. It’s also open to Sea Cadets and Army Cadets and culminates in the award of a Level Two Certificate in Team Leadership from the Institute of Leadership and Management. This is the toughest but most rewarding of our leadership courses – make it through and you’ll have the makings of a very successful leader…

In addition to those formal leadership courses, we sponsor Personal Awareness Courses at the Joint services Chaplaincy in Hampshire. These courses are aimed at you if you’re 16 and over and have demonstrated leadership potential and are designed to develop good citizenship skills. Although they are set against a background of the Christian faith they are open to everyone. 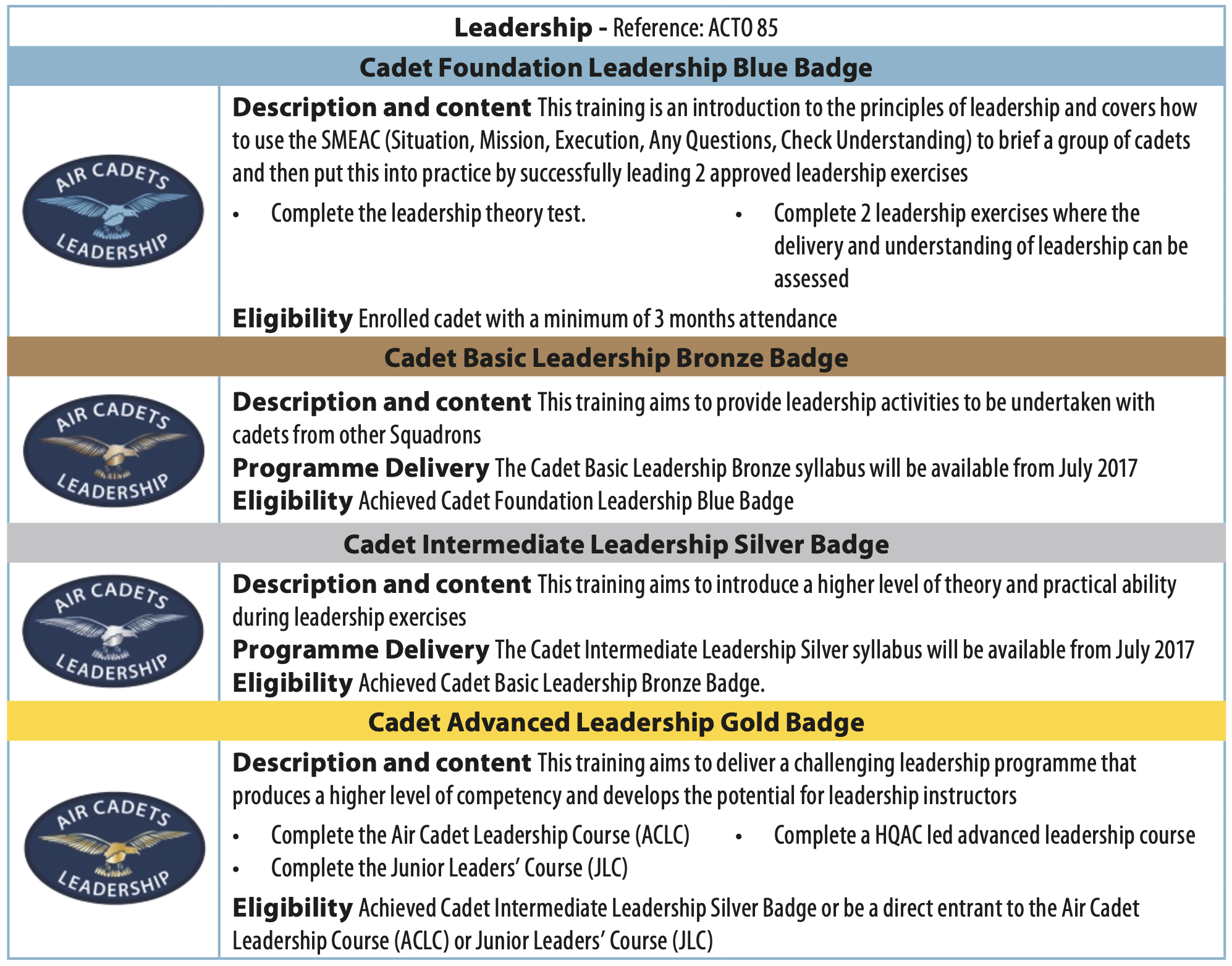